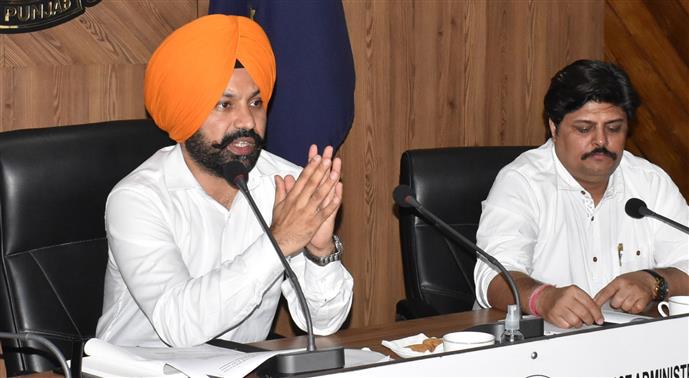 Jaspreet Singh, who was previously Deputy Commissioner, Mansa, reached the District Administration Complex this morning where he received the guard of honour. After assuming the charge, the Deputy Commissioner pointed out that projects relating to infrastructure, rural development and increasing the area under green cover will also be focused, in addition to informing the masses about specific services for citizens. recently added, including passport-related ones, to the list.

Emphasizing that the pending work in the offices will also be resolved in a few days, Jaspreet Singh said that the district administration, in consultation with the operational departments, will establish a timetable for the issuance of CNPs in accordance with the policy for processing of complete cases for bill of sale purposes. The DC said a plan would also be drawn up to address encroachments in the city and rural areas in the wider public interest.

To alleviate traffic congestion at the local level of PAP Chowk, the DC has instructed relevant officials to expedite the process of constructing a flyover to the Amritsar side from the road leading from BSF Chowk. Outstanding issues of construction and other projects would also be discussed with the National Highways Authority of India as maximum works were already underway, said Jaspreet Singh, who is well aware of the local issues due to from his previous stint here as ADC, Jalandhar.

Emphasizing that the legacy of zero wait at Sewa Kendras will also continue as done earlier, Jaspreet Singh said a number of new services have been included in the existing roster at Sewa Kendras. Passport-related services will also be made public so that people can enjoy this facility in the respective centers, the DC said, adding that constant monitoring will also be done for ongoing projects so that they can be carried out in the deadlines set. The Centre’s government-sponsored programs will also be overseen so that the proper use of funds can be ensured, he added.