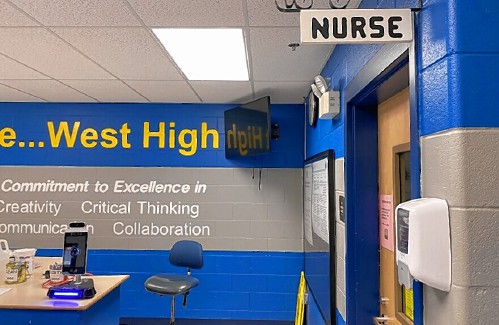 By the time SJ Walker returned to Keene High School last fall, she was used to the district’s COVID slogan: “We Got This!”

But when she walked through the halls, she saw the chaos.

“Everybody was like, ‘Yeah, we got it all under control,'” Walker recalled. “But it felt like everyone was running in different directions and into each other.”

Walker wore his headphones to block noise and avoid social interactions. She avoided fights in the hallways, but disruption was inevitable: a small group of students skipped class every day and roamed the hallways. Some responded to challenges on TikTok, vandalizing bathrooms and peeing in soap dispensers. Others staged protests at school and were suspended.

The situation has gotten so bad that this spring teachers started wearing orange reflective vests and patrolling hallways during their free time.

But the problems are not over. Recently, Walker and others staged a sit-in to protest cyberbullying and peer-to-peer sexual harassment at school.

Some days, she says, she feels like she’s in jail.

The behavior issues at Keene High School are serious, but they are not unique. As they near the end of another turbulent year, New Hampshire schools are grappling with a rise in behavioral and mental health issues that threaten to shape education even after the pandemic recedes.

Students and staff told NHPR that the majority of students have successfully returned to class, but as schools grapple with behavioral issues, the mental health crisis looms large.

Teen anxiety and depression are on the rise in New Hampshire and Across the country, and experts say it’s inseparable from behavioral problems. Schools have introduced new measures to help pupils, including social and emotional learning programmes, meditation skills, counseling and sensory breaks. But the chaos of the pandemic has taken its toll.

“None of us like uncertainty,” says Steve Schlozman, a child psychiatrist at Dartmouth Hitchcock Medical Center. “Our brain doesn’t like it; our societies are not doing well.

Schlozman says that over the past few years, teenagers haven’t gotten the predictability they need in school or at home, and it’s disrupted their development.

“A lot of their brain changes – so many of the experiences they have are so different from day to day, and even minute to minute, that they need external elements to be as consistent as possible,” he says.

When this stability is gone, certain social norms begin to break down.

At Somersworth High School, junior Maggie Lanoue says the majority of students are doing their best, but there is a breakdown in communication and respect. Children film themselves fighting in the hallways and post videos on social media. They insult teachers and do not apologize when reprimanded.

“Students say to themselves: ‘Anyway, it doesn’t matter,’” says Lanoue. “They have a ‘don’t care’ attitude.”

At Manchester West High School, principal Rick Dichard attributes the increase in altercations this year in part to social media. For much of the pandemic, most students at West High School were learning remotely. Their social interactions have also moved online – and that’s where most conflict begins.

Students post gossip and threats on Snapchat. And then they go to school, where these conflicts escalate in person.

“There are just too many; it’s an overload,” says Dichard. “When your brain is overloaded with all these stimuli, I just don’t think you have a way to process it all.”

But the troubles put him on alert. He spends more time than ever staring at the security camera footage, trying to figure out who is causing the disturbances in the hallways or the cafeteria.

Much of the disruptive behavior at West High School, like many high schools, occurs in the bathroom. Students regularly vandalize the walls with profanity and accusations from their peers, sometimes inciting fights. They also go there to relax when social tensions and anxiety are high.

And the response from many schools – requiring toilet passes – has frustrated pupils, especially those who, during a year of remote learning, did not have to ask permission to use the toilet. .

Mackenzie Verdiner, a sophomore at West High School, says the toilet pass rule began to look like a symbol of the lack of trust between staff and students. Recently, she says, a staff member followed her into the bathroom to enforce the rule.

“She yells at me while I pee, [asking] if I have a toilet pass,” Verdiner recalls. “Why? I don’t have all the answers; I just know it’s ridiculous.

“That’s what happens in our schools: five to ten little problems all happening at once,” he says.

Schools find themselves in a sticky situation, trying to establish consistent rules for controlling behavioral issues while treating students as individuals, each with their own set of mental health needs. Many mental health providers and school administrators say this will be the central challenge for schools next school year.

Barry, the Keene High School teacher, sees reason for hope. He says the district’s slogan – “We Got This” – was important to help keep morale high during the COVID crisis. But now people are starting to talk more openly about the mental health toll of the pandemic.

These articles are shared by partners of The Granite State News Collaborative. For more information, visit collaborativenh.org.