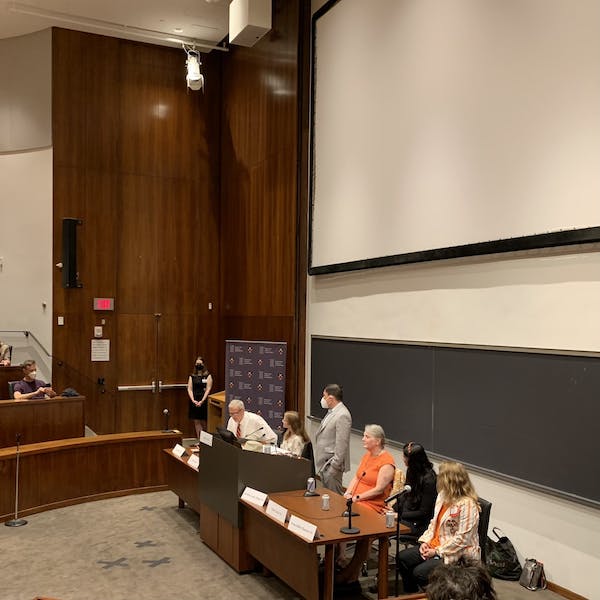 During a reunion weekend forum mental health, former panelists whose work focuses on mental health discussed the shortcomings of the current insurance system to address the mental health crisis, the importance of openness and discussion about mental health issues, and their personal experiences.

The May 20 event was moderated by Director of Counseling and Psychology Services, Dr. Calvin R. Chin. Panelists included Larry Arata ’82, the co-founder of the Opioid Crisis Action Network (OCAN), Carinthia Bank ’17, who works as a therapist, Jennifer Balink ’87, executive director of place of kinshipNeha Uberoi ’12, a psychotherapist who counsels athletes, and Oona Miller Hanson ’97, who works with young people with eating disorders.

Arata, along with his wife Heather, founded OCAN following the death of their son Brendan from a drug overdose in 2017. The organization provides grants to those recovering from opioid addiction to pay for the rent, medical bills and transportation.

“We founded OCAN because over 70,000 people died with Brendan in 2017,” Areta said during the panel, “because it shouldn’t be any harder to find a best-practice treatment for a loved one. more expensive with depression and addiction than shopping for heart surgeons for Heather’s dad or cancer surgeons for my mom.

He mentioned that Brendan had been sober for 96 days when he died, but felt urges to relapse during that time. His sister had taken him to a treatment center, where medical staff agreed to admit him, but his insurer refused to cover him.

“Our insurance company, one of the best in Pennsylvania, refused to cover his admission because it was not medically necessary,” Arata said. “The cravings are treatable.”

He said he heard similar accounts from others when he ran for a seat in the United States House of Representatives for Pennsylvania’s 5th congressional district in 2018. Along with colleagues at OCAN, Arata also wrote Senate Bill 975, which “would prohibit anyone from being turned down for treatment or treatment coverage for being sober,” Arata said during the forum. The bill is currently pending before the Pennsylvania State Senate.

Bank, who works as a therapist in public and private practice, said she shared the concerns expressed by Arata about insurance companies.

“There are certain things I need to do my best with patients and clients. And there are a lot of hurdles with the way the system is right now,” she said. “We need to have more treatment options so it’s easier to accept people when they’re not in crisis.

Balink, the director of Kindred Place, spoke about what she learned in her work with the organization, which provides counseling and group therapy for parents, families and individuals.

“One of the things we’ve learned over the past five years is that every family struggles, every person struggles in one way or another at different times in our lives,” he said. she declared. “And to talk about that as something intervention-oriented, I find very unnecessary and I think more about how we all support each other in our personal health, our personal mental well-being.”

Get the best of ‘the prince’ delivered straight to your inbox. Subscribe now »

She, like Arata and Bank, spoke of the need for reform, saying “it’s almost impossible to get help if you’re not in big trouble.”

“You can’t get an annual wellness visit for mental health and have it covered by insurance. So if you don’t have the resources to see a therapist once in a while,” she said, “you have to pay for it.

Uberoi, who works as a psychotherapist and counsels athletes, shared her experience with an eating disorder as a college tennis player.

“The other athletes weren’t really talking about their mental health or what they were suffering from. My classmates didn’t tell me how badly they were struggling in class, that they weren’t doing well in a class. There wasn’t really an open environment to talk about mental health,” she said.

“The need for success,” added Uberoi. “All of the great qualities that make us special as a Princeton community can also be very detrimental and harmful.”

She said that as a psychotherapist, she focuses on figuring out how to bridge the gap between success, which she says she often has to “numb [her] emotions.”

Miller Hanson, who works with young people with eating disorders, explained how she teaches parents to “raise children who have a healthy relationship with food and their bodies.”

Eating disorders, she says, “can happen to anyone; any gender, any race, any size, any socio-economic status and more pediatricians, teachers and coaches need this information.

Chin asked panelists what they thought was the most impactful reform “that would solve the mental health crisis.”

Balink said a change in how individuals approach mental health would help.

“Think of it as wellness as part of physical health in the individual state of mind,” she said.

Hanson added that there was also a need to pay mental health workers more.

“We really need to honor the high quality care that these professionals provide to families, otherwise, we’re really, we’re going to have a total absence of psychiatry and other mental health services at a time when we need them most.” , she said. said.

Balink mentioned that it’s also important to make it easier for patients to get insurance reimbursements for care.

Chin then asked speakers how parents and mental health professionals can adequately support children, to which Uberoi spoke about the challenges parents face.

“We don’t have to be mothers or caregivers with the right amount of support to develop and raise emotionally stable children,” she said. “So for me, when I think of reform, I think of the very early stages of carer support, and that feels like free childcare education for parents.”

“Even preschoolers learn to fear food, to label food, to categorize food as healthy or unhealthy, which is kind of a code for good or bad,” she said. “I think it really starts in the early years, to really help families have that healthy relationship with food at home.”

Chin then took questions from the audience.

Cameron Stout ’80 shared his experience with depression and alcoholism, which he says led him to become a mental health advocate. He said he discovered that “the insurance problems are huge” during his recovery.

“So has anyone on the panel heard of a way to put more pressure on insurance companies?” Stout asked.

Arata said progress has been made since he founded OCAN.

“When we started this organization, insurance companies wouldn’t even reimburse drug treatment for drug addiction and said it wasn’t always medically necessary.” He said now he “seldom hears[s] someone says he was denied the scholarship for his medicine.

He added that a national strategy is important, rather than relegating responsibilities to states.

Chin ended by asking the panelists for their individual call to action to act on the mental health crisis.

Arata emphasized spirituality, noting that his faith helped him after the death of his son. He added, however, that “our spiritual community must end the stigma associated with those who deal with their addiction.”

Bank mentioned the importance of just talking about mental health and not waiting for a crisis. Uberoi echoed that sentiment, emphasizing the importance of being vulnerable with others and “sharing your joys and sorrows.”

Sandeep Mangat is an associate editor who has reported on labor shortages on and off campus, University guidelines regarding the COVID-19 pandemic, international student life, and research conducted by the Princeton faculty. He can be reached at smangat@princeton.edu and on Twitter @s_smangat.