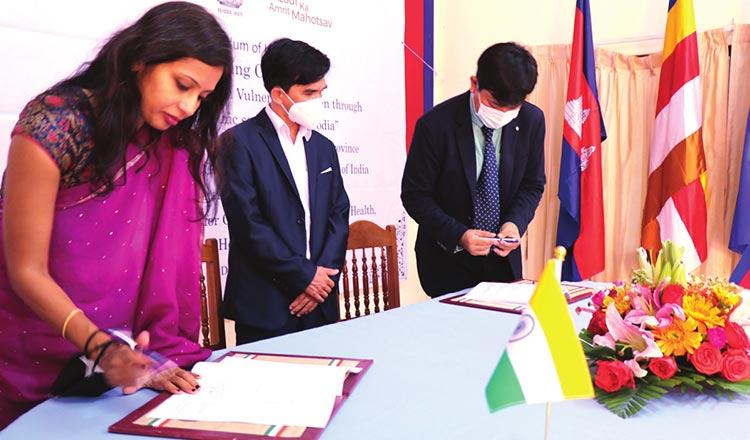 India on Friday signed a memorandum of understanding in Cambodia to reach out to children with psychosocial disabilities.

The Memorandum of Understanding under Mekong Ganga Cooperation in Cambodia in the Age of Pandemic was signed by Indian Ambassador Dr. Devyani Khobragade and Kim Rattana, Executive Director of Caritas and the Cambodian Government, according to a statement from the Indian Embassy.

He said the MoU targets orphans, vulnerable children (OVC), children with psychological disabilities and children left behind (LBC) through a mobile clinic at primary and secondary level by the through workshops between teachers and health care providers in the provinces of Kampong Cham and Tboung Khmum.

The statement said the initiative was part of the Indian government’s Quick Impact Project (QIP) program under the Mekong Ganga Cooperation which will be implemented by the CCAMH Community Team with the support of Caritas Cambodia (CC ), an international NGO.

The signing event was attended by dignitaries from the Ministry of Health and representatives from Kandal Provincial Health Department and Chey Chumneas Referral Hospital (CRH) in Takhmao City.

Under the QIP, the Indian Embassy is undertaking other projects in partnership with Caritas Cambodia, the statement added.

The Indian government is cooperating with the Royal Government of Cambodia on many grant schemes which contribute significantly to the socio-economic development of the Cambodian people, he said.

The statement adds that under the QIP program, the Indian government implements 10 projects each year in Cambodia by providing funding of up to $50,000 for each project.

The statement explained that out of 46 projects, 21 projects have already been completed and the remaining 25 projects are in various stages of execution. He said the projects received an overwhelming response and created a distinct and visible impact not only among the beneficiaries but also in the wider community.

In his welcome address, Dr Bhoomikumar, director and consultant child psychiatrist of the Caritas Center for Child and Adolescent Mental Health Program highlighted the “contextual relevance of reaching the excluded”.

Rattana thanked the government and the Embassy of India for providing grants for the project which would benefit orphans, vulnerable children, children with psychological disorders and children left behind. Rattana especially thanked the Ambassador for her continued support and cooperation which has been extended to CCAMH over the years.

She underscored the positive impact of the QIP projects in strengthening overall bilateral relations and goodwill between the Indian and Cambodian peoples, according to the statement.

He added that the QIPs will focus on health, tourism development, education and digital education, with particular emphasis on female literacy.

Ambassador Khobragade also added that it is her main effort to support projects, which will have a direct impact on the lives of people who are marginalized and below the poverty line, women and children in particular, according to the statement.